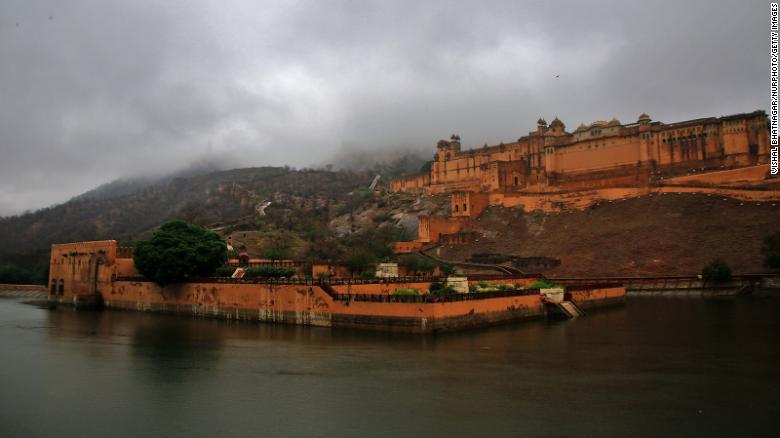 New Delhi (CNN) – At least 65 people were killed by lightning strikes and thunderstorms in the north Indian states of Rajasthan and Uttar Pradesh on Sunday, authorities said.

In the city of Jaipur in Rajasthan, 23 died after lightning hit Amer Fort — a popular tourist spot on the outskirts of the city, according to Shankar Lal Saini, a senior disaster management official in Jaipur.

“There was a tower there. When the lightning struck, the tower’s wall collapsed, many people were buried under it. Since the fort is on a hill, when the debris was falling and space reduced, some people also fell into a ditch,” Saini told CNN.

The incident happened at 6:30 p.m. on Sunday, with rescue operations continuing until 7 a.m. on Monday, according to Saini.
Women and children were among the bodies recovered. The victims were declared dead on arrival at the city’s Sawai Man Singh Hospital.
“I have pain all over my body because stones and honey bee nests fell on me,” said 22-year-old Izhar Ali, who survived the strike and is being treated at a hospital in Jaipur, on Tuesday.
Ali had gone with his younger brother, cousin and some friends to the site; they had climbed up the watch tower to take a photo, but the wind and rain were so strong they decided to just sit and wait it out.

“I had my phone in my hand and I remember seeing the time, it was 7:04 p.m. when lightning struck,” Ali said. His brother slipped and nearly fell off the tower, and as the group pulled him to safety, lightning struck one of Ali’s friends, who died.

When the rain finally let up, they carried the friend’s body down the tower. “There were people lying dead around us,” Ali said.

A further 11 people were rescued and are in stable condition, Saini said. Those at the fort included locals as well as tourists, he added.

“Because it is a hilly area and there are a lot of trees the rescue teams kept looking till morning in case anyone is left behind but now all people have been accounted for,” Saini said.
Several people were also killed by lightning strikes in other parts of Rajasthan, according to Chief Minister Ashok Gehlot. He asked officials to provide immediate assistance to the families of the dead in a tweet on Sunday.

In neighboring Uttar Pradesh state, 42 people were killed in lightning strike and thunderstorm-related incidents, according to state disaster management official Aditi Umrao.
On Monday, Prime Minister Narendra Modi expressed his condolences on Twitter, and announced the government would grant $2,680 in compensation to victims’ families. Those who survived the strikes but were injured would be granted $670 in compensation.

Deaths from lightning strikes are common in India and the South Asian region in May and June each year.

In June 2020, at least 107 people were killed by lightning strikes in the states of Uttar Pradesh and Bihar in just two days.