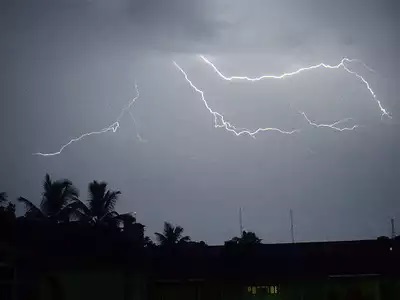 AURANGABAD: A bike-borne man and his nephew are among 10 people killed due to lightning-related incidents in different parts of Marathwada in the 24-hour period ending on Monday morning.

As per the official data, Parbhani district reported three such deaths, followed by two deaths each in Aurangabad and Osmanabad districts, and one each in Hingoli, Jalna and Beed districts.

Moreover,19 heads of cattle were also killed in lightning strikes at various places in the past few days.

Sunil Shinde (39) and his nephew Sunil Trigote (38), both residents of Chikalthana, were struck by lightning while they were travelling on a two-wheeler in the Jaipur-Shivar area of Aurangabad district.

According to local reports, one of the deceased was talking on his mobile phone when the lightning struck them.

The meteorological department has predicted more thunderstorms and lightning activity in Aurangabad and parts of Marathwada over the next 48 hours.

In the wake of the 10 casualties due to lightning, the disaster management authorities have once again advised people to follow all the safety tips to avoid losses ( to life and property) due to lightning.

“The use of cellphones or any other electrical gadget while standing in the open during thunderstorms is not advisable,” disaster management office for Aurangabad Ajay Chaudhari said.

Citizens should also not stand beneath trees or near electricity poles when the conditions are overcast or during thunderstorms to avoid the possible impact of lightning,” Chaudhari further said.